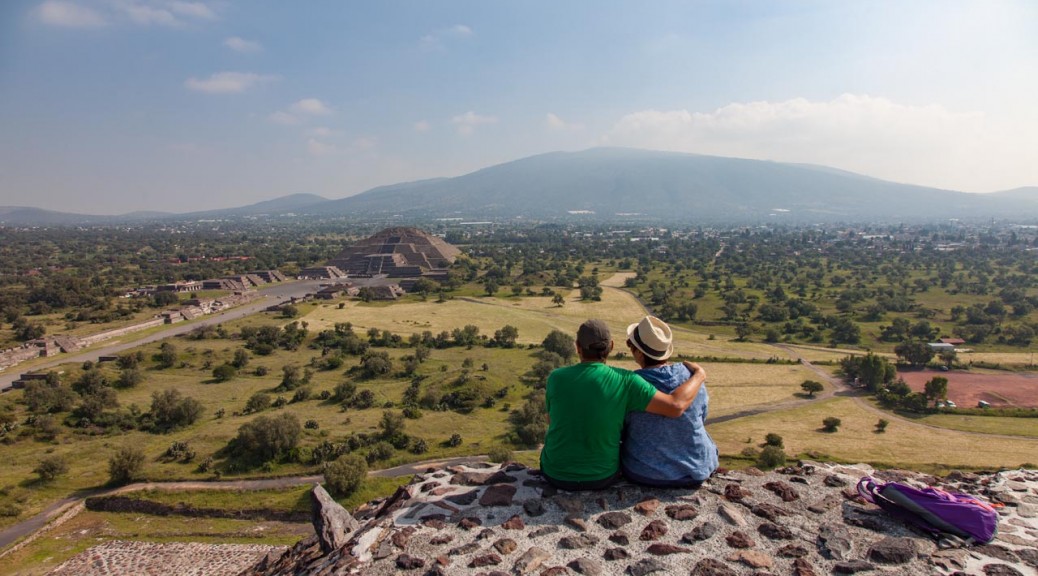 Several people suggested that we visit the pre-Columbian city of Teotihuacan, which is about an hour outside of Mexico City. So we decided to add that to our itinerary and stop there for a night on our way to Oaxaca.

Following the advice, Matt and I got up unnaturally early so that we could get there before the crowds as Teotihuacan is the most visited archaeological site in Mexico.  It was excellent advice. Not only were we able to get out of Mexico City before rush hour traffic, but we arrived at Teotihuacan just as they opened.

We drove around to park in the parking  area closest to the Pyramid of the Sun, the largest of the pyramids.  In the summer heat, this is the first that you want climb in the morning. 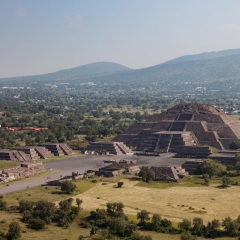 Since Matt and I know little about pre-Columbian, we decided that it would be worthwhile to hire a  guide who could explain about the cultures that built and occupied the city, the religion, and the culture.  The history is quite complicated and contested by scholars, so I will not attempt to repeat all that our guide taught us here.

Briefly, Teotihuacan is an ancient pre-Columbian  city that was established in about 100 BC. The main buildings took about 350 years to build. The city lasted until about 800 AD, but it is thought that it was sacked around 550AD. It began as a religious center that grew into a multi-cultural city of about 150,000 people at its largest. Scholars argue about who built the city and even over all the ethnic groups that lived there during the city’s existence. The Aztecs were not part of the original groups, as is commonly thought. The Aztecs came later and adopted the ruins as theirs and some of the culture that they discovered there. They did give it the name that we currently use for the city, Teotihuacan.

It was a highly influential cultural site and scholars do find evidence of its influence in Veracruz and Maya areas of Mexico and Central America. The city’s main buildings line the main boulevard called the Avenue of the Dead that runs north-south. There are many theories why the city was built so precisely in alignment, some think to aid with crop planting, certain religious rituals, or perhaps in alignment with the nearest tallest mountain. 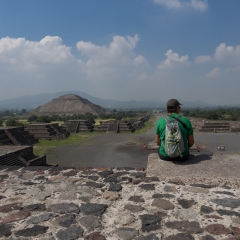 The Pyramid of the Moon is on the north end of the avenue and is flanked by homes of the high priests. Next to them, running down the avenue, are homes of high ranking politicians, traders, and more religious figures.

The largest pyramid is the Pyramid of the Sun. It is about halfway down the avenue. It is thought that only priests were allowed to climb to the top of this 220 foot high structure. It is the third largest pyramid in the world and the seventh or eighth highest.

The third pyramid, found at the southern end of the Avenue of the Dead is dedicated to Quetzalcoatl, the god feathered serpent. Our guide suggested that this god was worshiped like a god of the earth, a terrestrial god as opposed to the gods of the sun and the moon.

Matt and I climbed all three pyramids that morning and walked all over the ancient city. It was truly impressive and worth visiting. We do recommend getting there early. By the time we left, it was quite busy. Seeing it with so few people was fantastic. Bring your walking shoes, plenty of water, and hire a guide.