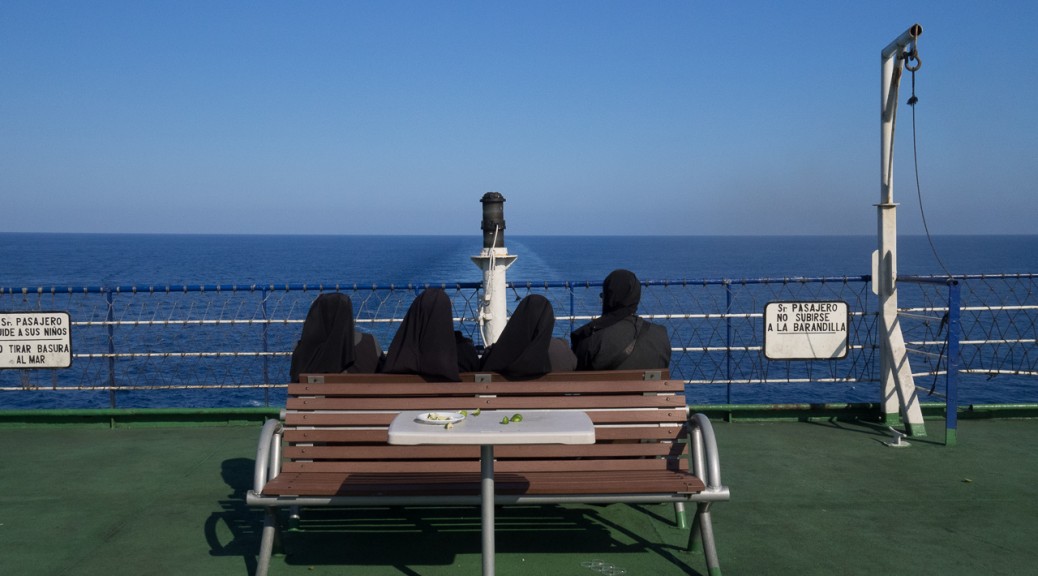 While planning this trip, we knew we would leave Baja at some point, and we had a choice, we could drive over a thousand miles back up where we had already been or put the car on the ferry and ride across the Sea of Cortez. 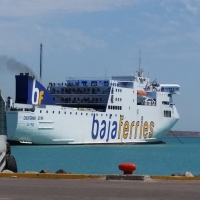 As you can guess, we took the ferry.

The truck needed import papers, which we had failed to get in while crossing the border in Tijuana or while we were getting our visas in Ensenada six weeks ago.  Thankfully the import paperwork took all of about 30 minutes and included a lovely drive along the coast to the port of La Paz, which is really in Pichilingue. We went to the Banjercito’s office at the port to get our import permit.  It’s the same agency as where we purchased our visas.

For the car permit, we paid approximately $50 + a deposit based on the age of our vehicle (we paid $200).  The deposit will be refunded when we cross over the border again with the vehicle and have a customs agent scrape the sticker off.  This was a painless transaction, aided by the very nice woman  at the office spoke fluent English. It also helped that we had copies of all the paperwork we needed (passport, registration, and visa).

The total cost was around $280 for us, the truck, and a private cabin.

I bought our ferry tickets online. That was a bit trickier because their system was having issues with one of our credit cards.  The total cost was around $280 for us, the truck, and a private cabin.  As a note, the cabin comes with a private bathroom and a shower and power outlet. It was worth the little extra cost.

The day of the ferry ride, we decided to try to pick up the tickets based on some reading online comments and we figured that it wold be safer than just assuming that an “e-ticket” was going to be fine. Thankfully this was the right thing to do because something was screwy with our reservation.  We spent 90 minutes waiting at the BajaFerries office in La Paz while the staff there figured it out and got everything sorted.  This was a little stressful as we hadn’t exactly timed a 90 minute stop into our schedule to get to the ferry, but everything worked out in the end.

Bringing the car into the port required a brief security check, in this case we had our car import sticker examined and the guard then double-checked the VIN.  We paid 150 peso’s to have the vehicle weighed. We then proceeded through another security process where they photographed the license plate, VIN, and my passport.  From here things became a little confusing.

After going through this, we found out that we needed to wait until they are ready to load.  We drove around the small port area until someone pointed that we were supposed to wait just past the weigh station, which was actually between the first and second security check. Yes,this means that you pass point C while going from point A to point B. We just smiled a lot and figured someone would eventually tell us where and when to start loading. 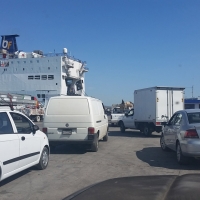 About an hour before the ferry was to leave we got into a new queue, though at this point, it was vehicle driver only.  Neeley had to get out and wait with other passengers in a departure lounge.  I and the other car drivers waited for another 30-45 minutes while the tractor trailer trucks loaded up on the ferry (the primary customer), and then we were called to drive up on top of the ferry.

I parked the truck, and brought my gear onto the ferry and found Neeley.  We collected our cabin key (surrendering my ID temporarily) and then explored the traveling space a bit. 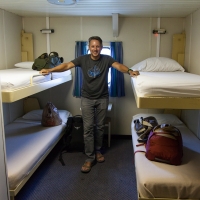 As other blogs have described, there were two rooms, one lined with aircraft style chairs, though not as compact as normal economy, and one with tables for eating or lounging.  DVD’s were playing movies around the clock in each room on large LCD panels, some in English with subtitles and some dubbed.  There was also an upper open air deck with sundries to purchase and loud music playing.

We were supposed to leave around 5pm, but ended up departing closer to 6pm, and didn’t arrive into Mazatlan until 2pm the following day

We were supposed to leave around 5pm, but ended up departing closer to 6pm, and didn’t arrive into Mazatlan until 2pm the following day.  We got two meals on the ride, both are meat, rice, beans, corn tortillas (Neeley was hitting her limit of corn tortillas at this point).  Drinks and other snacks can be purchased, but there is not a large variety.  Bring some snacks if you take the trip.

We spent a large portion of time chatting with Ivan,  a fellow traveler who was driving his motorcycle (BMW 1150GS Adventure) down from Los Angeles to wherever he decided to stop.  Click on his name for pictures from his adventure.

Departing was relatively easy, with one important note: if you have a vehicle, don’t wait for an announcement to go drive it off, just head back to where it was parked.  We loitered around for 30 minutes trying to figure out what we were supposed to do until finally just heading out to get the truck.  Though again, I was the only one allowed to get the truck.  Also the last tidbit of information, you need your ticket multiple times, to load the truck, to unload the truck, and for each meal.  Just remember to grab it and keep it in your pocket.