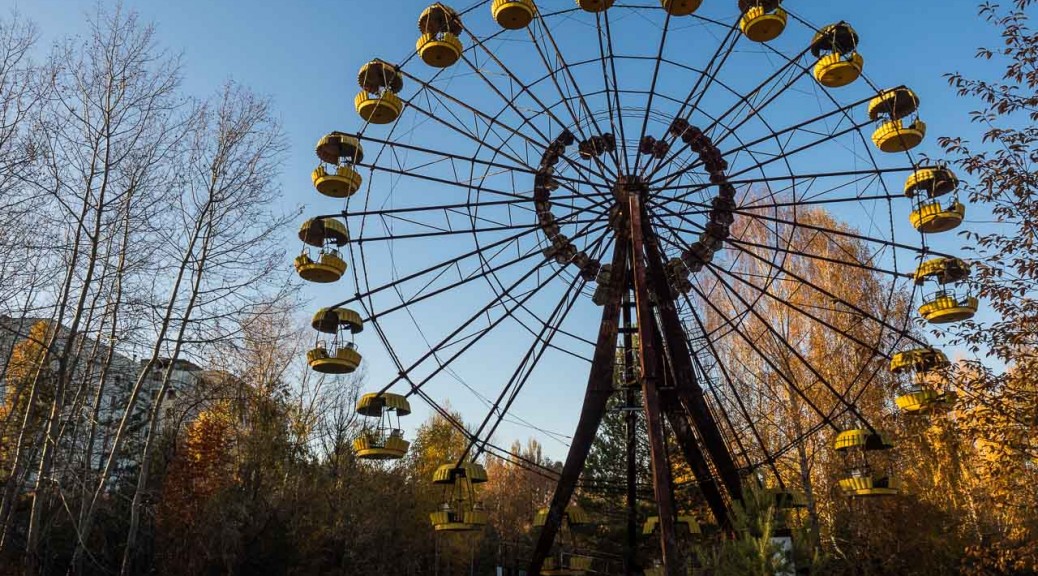 Neeley and I visited Pripyat and the Chernobyl Exclusion Zone while we were Kiev.  Much has been written about the 1986 nuclear accident at Chernobyl, so it makes little sense to repeat it here, you can easily find numerous accounts of the tragic incident on the internet.  In the past few years, many photos by other photographers have been published and intrigued us, so we decided to go visit the ghost town and see it for ourselves.

To go into the zone, you need to provide your passport to a licensed tour agency at least a week before going.  This is a formality, but your passport is checked as you enter the area, and lack of proper paperwork will result in a refusal to allow you to enter.  We sent in all of our information while we were in Paris, at the last minute, and were still able to enter without problems.

There are a number of choices for tours, you can do a single day tour from Kiev to a week-long trip through everything.  We chose to do a two-day tour to allow more time to see things and to take pictures. Because of the time of year, our tour group was only three people, the two of us and a photographer from Switzerland. As the three of us were photographers, we turned it into a private photo safari.

A multi-day tour involves staying inside the exclusion zone at the Chernobyl Hotel.  An experience that is probably much scarier to think about than to actually do.

We met with the tour operator around 8:30 in the morning in Kiev.  The drive from Kiev to Chernobyl was approximately two hours. We traveled north through small towns, until we arrived at a checkpoint at the outer edge of the “Chernobyl Nuclear Power Plant Zone of Alienation” commonly (and more easily) referred to as the “Chernobyl Exclusion Zone”. This zone is a 30 km radius from the Chernobyl nuclear power plant, specifically reactor number 4. The zone is one of the most radioactively contaminated areas on earth.  At the checkpoint our passports were verified against the registration and approval list.  We drove into the administrative area inside the zone, and walked around multiple monuments dedicated to people and places that were forever changed because of the accident.

After the retrospective, we were brought to a hotel to drop off our overnight bags and eat a surprisingly substantial and delicious lunch. If you are feeling ambitious, you can enjoy some locally grown apples (I did). The hotel is basic, but comfortable, like a lodge in a national park.

We then spent the next five hours exploring Pripyat and the surrounding area, including what was left of some villages.   Driving around Pripyat is a bit surreal.  Houses and buildings are literally in the woods, I get the feeling that in 10 more years, the tours will require 4×4 trucks, and not normal vans and tour busses that are currently in use.

As the sun set, we went back to have dinner at our hotel. It was a welcomed early night because despite sitting in a van for much of the day, we were exhausted.  The next morning, we went back out to see even more of Pripyat, to visit the actual reactor area, view the sarcophagus, and the newer containment unit being built for reactor 4.  All of this was done while periodically checking our guide Tanja’s Geiger counter for the radioactivity levels. Seeing the numbers made this trip even more unreal.

As the second day came to a close, we visited a couple of people, Ivan and Maria, who had moved back to their house after some cleanup had occurred. These people who moved back are called “self-settlers”, and are allowed back, though very few moved back.  In certain areas, the radioactivity is less than downtown Kiev due to the luck of the wind currents  that tragic day in late April 1986 when reactor 4 erupted.  Living in some areas, like Ivan and Maria’s village of Paryshiv is actually safe. They do not have public services, except electricity, but they have well water and a fire place for water, heat and cooking.  Ivan and Maria were both in their 80’s, but showed no inclination to move someplace easier.

We bid them farewell (after sharing some of Ivan’s homemade blackberry vodka), passed through radiation checkpoints, and drove the two hours back to Kiev.  Chernobyl is a mix of things.  Much of the town is a ghost town, left as it was when people were told to leave.  Some of the town has also been exploited and changed by the tourists that have come through, looking for creepy photos, or strange stories.  In the end, it’s a reminder of a catastrophic nuclear disaster from 26 April 1986.

Thanks to Chernobylwel.com and our guide, Tanja, for a really fantastic experience.  And also Tanja’s half brother for driving us around.

4 thoughts on “Chernobyl and Pripyat”