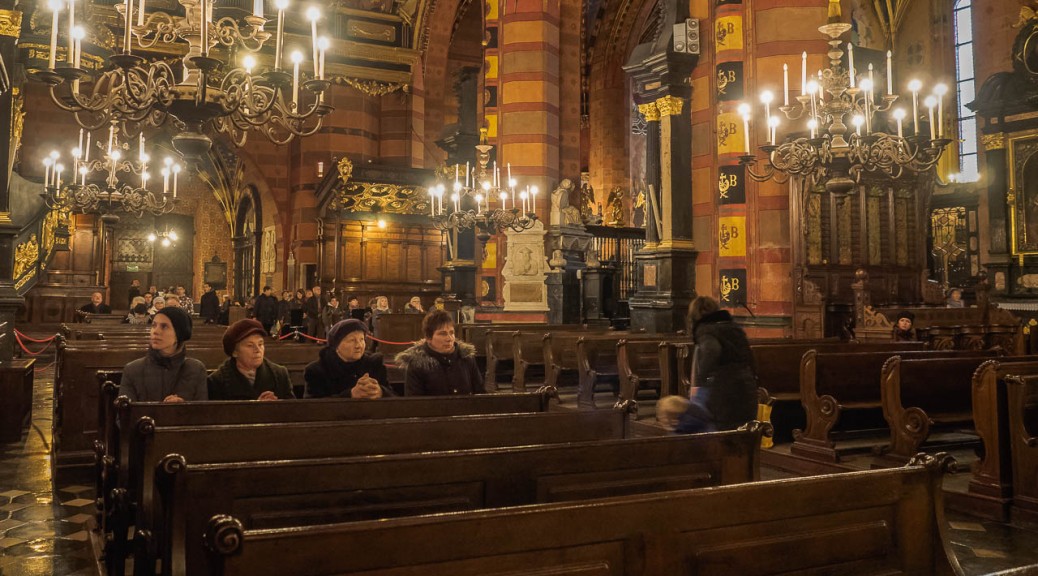 Krakow doesn’t show up as a common destination for Americans, but I wanted to go.  My mother’s side of the family is Polish and live in the large Polish community in South Chicago. I grew up learning about that heritage through the foods that my mother and grandmother cooked, holiday traditions, and family visits to Chicago in the summertime.  Neeley and I wanted to fit a trip into Poland after Prague, so off we went to Krakow.

We had a bit of a hiccup on our ride to Krakow, and missed a connecting train. All was fixed easily by train station staff, but that meant that we arrived into Krakow after dark. We had just enough time to drop our gear off in our apartment, run to the grocery store to pick up essentials for the week, and crash into bed after our long day of travel.

On our first day in Krakow, we attended free walking tour of the Old Town and the Castle. We also got a chance to hear the trumpet player, who comes out every hour on the hour and plays a 5 note anthem. These tours continue to be a good source of basic information for us as they offer a good overview of the city. As the tour ended and the rain started in earnest, we asked the guide for a good place to eat a late lunch.

Our guide suggested we visit a place close by called Pod Wawelem that was  near the the castle. After a short, but wet walk later, I was sitting in the restaurant examining the menu. That’s when I spotted a “meat sampler platter” (Neeley was in the bathroom searching for a blow dryer).  What could possibly go wrong? It looked good and seemed to be priced for two people, I decided to order it for the both of us and get a good sampling of polish meat products. What we ended up with, along with a smoked cheese appetizer that we foolishly thought we would need, was an Everest of meat piled up on a plate.  There were sausages, schnitzel, pork chops, cuts of beef, more sausages, and crowned with fried shredded potatoes just in case you needed something to wash down the meat.  Our dining neighbors eyed the mountain, but thankfully didn’t pull out their cameras to document the carnage.  We started eating, trying to make a dent in this huge smorgasbord.

With our second beers, we finally had to admit defeat, only consuming about three quarters of the feast, but at least sampling everything.  Go ahead and try it, I think it was called the “officers platter”, but it really is just going to be your doom.  We slowly rolled out and made it back to our apartment to nap and pass out.

The next day we toured the Jewish quarter on another free walking tour and explored over the river.  Much of this area is an up and coming area filled with bars and nightlife, with great street food to cater to the patrons of those establishments.  In Krakow, there is one popular type of street food called zapiekanka, or “pizza”.  These are open faced baguettes traditionally covered in mushrooms, cheese, and tomato sauce.  It’s possible to get any number of variations of toppings by just asking.  They are cheap and help fill your stomach before or after drinking alcohol in the area.  They are common and you will find them throughout Krakow.

Unfortunately it was cold and raining hard during most of our days in Krakow, making it harder to work up the energy to go out and explore, but we did go back out and explore around the Castle.  To avoid the cold one day, we had lunch at a pierogi restaurant.   A pierogi is a traditional polish dumpling with a variety of fillings both savory or sweet.  We attempted to consume our body weight in pierogies, something that is would be easy with the variety available.

On our second to last day, we signed up to take a tour of the salt mine located a short distance outside town.  This trip is advertised by many of the tour operators in town, and easy to sign up for if you are interested.  As the tour itself is run by the mine, there is no reason to pick one tour operator over another.

We planned on visiting the castle, but it was Monday, and  the castle was closed (more traditionally, unlike Dresden).  Additionally we had missed the opportunity to acquire tickets the previous day, due to the way tickets are distributed.  The tickets are free during November, but they had a maximum they would distribute each day when we were there.  Reminding us to research days that historic locations were open.

In the morning a driver came by to pick us up, picked up another couple, and drove us out of town to visit the mine.  The mine runs tours every 30 minutes. We opted for the traditional tour, which gave us a view of the many different salt carvings and a trip to the famous chapel located over 100 meters underground.

It was very touristy, and somewhat rushed, to keep the pipeline of people moving through.  In the end Neeley was unimpressed with the tour, and wished there was more detail about the operation and history of things.  We got brief snippets of information, but not enough.  If it sounds interesting, you’ll probably enjoy it, though reading up beforehand may make it more interesting.  Kids may enjoy the fact that they are in a cave deep underground. They do also offer a tour that highlights the workings of the mine, but it doesn’t allow you to see the chapel, which is the highlight of the tour.

On our last day in Krakow we actually spent it outside of Krakow, in the town of Oświęcim to visit the Auschwitz-Birkenau concentration camp.  We have separated that into a later blog post.

Leaving Krakow for Vienna on our last day, Neeley and I decided that we definately want to come back and see more, but maybe in the  summer time when there is less rain.  The weather put a bit of a damper on our interest in walking around, but when we did go out we were met with friendly people and some beautiful locations.  There are more tourists in the summer, but far less than where we just were in Prague.  We enjoyed our time, and hope to come back in the future.